The impact of lockdown on mobile gamers behaviors

The unprecedented Covid-19 outbreak has changed people’s behaviours in countless ways with cultures, industries and individuals forced into strange and unusual patterns. Here at Google Play, we’ve conducted an extensive player survey and analysed our own data to understand how the outbreak is changing the growth and behaviours of gaming populations.

Mobile games are becoming more popular as users turn to their phones for entertainment and social activities during isolation, giving developers the opportunity to help their players through the pandemic. Supplemented by insights drawn from professional studios and our internal data from the Play Store, this article is intended to give confidence by highlighting several trends that developers can use to operate successfully during this difficult time.

Check out the Full Report on our player survey for additional insights and regional data.

Before diving into the results, we should briefly turn to the methodology behind our player survey. The demographic splits are shown in the images below, alongside how these players report being impacted by the lockdown. 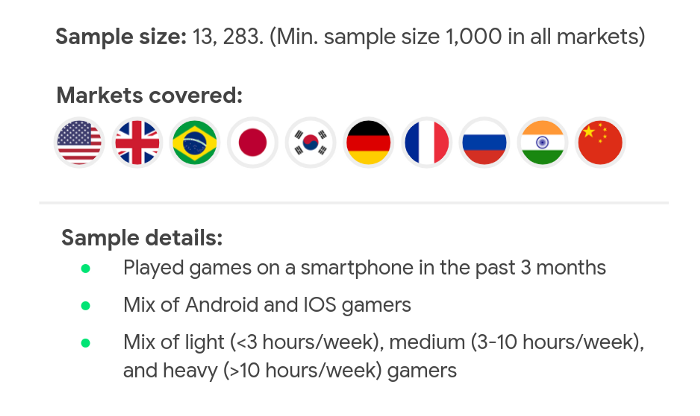 The questions focused on how players were playing and spending money on mobile games during quarantine, compared to how they behaved before lockdown and how they expect to behave afterwards.

Engagement with games is increasing both in the number of players and level of engagement per player — but motivations remain largely the same.

First we’ll look at player motivations, and how players are engaging with games during the pandemic. The key takeaway from the survey is that on average across all demographics, around 70% of gamers report they are spending more time playing mobile games and only a tiny fraction report they are playing less. In addition, 65% of respondents said their gaming sessions were longer than before. Critically, between 20–60% of respondents (depending on region) said they expected to continue with their increased playtime beyond the pandemic. These reports are confirmed by Google’s data which has seen (on average) a 10% increase in engagement in mobile games with even higher figures (20–30%) in genres that reward higher levels of player commitment or skill such as Action, Adventure or Simulation games. Developers have also mentioned this trend, with players suddenly requesting more playable content as they burn through what is available faster.

Interestingly, despite these changes the motivations behind gaming have not changed significantly. When asked to pick their motivations from a list of options including “stress relief” and “connect with friends/family”, no motivation deviated by more than 3% from pre-pandemic levels. This suggests that new behaviour patterns emerging are purely down to the change in circumstance (rather than, for example, a new and fundamentally different demographic), and the individuals involved are motivated and interested in familiar ways. A more significant motivational change relates to people’s schedules, with players reporting increasing similarity between weekdays and weekends and fewer play sessions initiated as a result of commutes. The evidence supports adjusting promotional activities and notifications to reach people at distributed times throughout the week rather than key windows on weekends.

Players are drawn to games with strong social features and are returning to old favorites.

Given the trends above, it’s hardly surprising that we’re also seeing lots of gamers buying new games — 45% on average with higher peaks among groups such as 25–34 year olds. Another insight is supported by both the player responses and what we’ve heard from developers — that many users are returning to old favourites and re-downloading them. Presumably this is due to users previously churning from the game due to a change in their availability who now find themselves with more free time and fond memories, with 49% reporting ‘Nostalgia’ as the primary reason to return — followed closely by ‘new updates’ at 36%. Now seems like a good time to experiment with reigniting your older communities and re-engaging lapsed users, especially if you have new content they may not have seen before.

More generally, users report they are playing games with strong social features, easy accessibility and high skill caps during this time of isolation, in particular MMORPG, MOBA and Battle Royale gameplay. In contrast (since these genres are often dominated by a few key titles) the largest increases in reported downloads are visible in the Action, Arcade and Puzzle genres. It seems probable that the desire to combat isolation by playing with friends and competing/cooperating seems to be at least matched by the desire to combat boredom with an easily-accessible, quick-to-access more casual game. It is also interesting to note that many developers have reported that interest in social features has driven population growth particularly among the non-traditional demographics of women and older players.

In addition to finding our respondents were motivated to buy a game based on social features, we also investigated how their engagement with those features had changed within the game. We found a universal trend towards making more use of social features, though this was far more pronounced in some areas (e.g. Brazil — 60% increase) than others (e.g. JP — 12% increase). The types of social activity we see these increases in is also very consistent, with different types of social interaction all showing a similar increase in each region. We tracked 10 different kinds of social features and each type of interaction rose by a roughly similar amount, indicating there is no ‘best’ social feature to focus on. 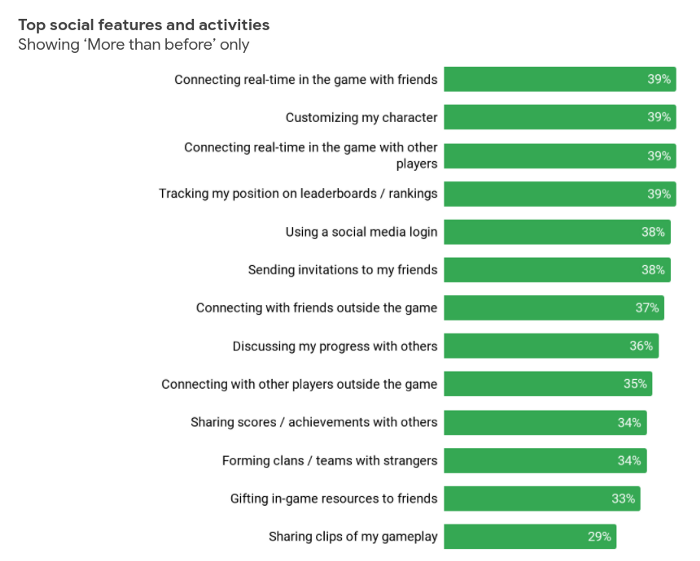 This gives developers a unique opportunity to strengthen their communities during lockdown. Offering more opportunities and higher rewards for social engagement during a period where people are seeking a break from isolation will not only help the community by providing more communal activity during what is for many a lonely time — it will also help grow connections within the community and sub-groups which will drive retention and lifespan of individual players.

New Mobile Gamers are likely to continue playing and appear in all genres, but are drawn to Puzzle games and have similar motivations to other players.

While the analysis of player motivations above concluded that there is very little difference between the motivations of new players and pre-covid players, it is still useful to investigate this section of the community more closely as they provide a fantastic opportunity for UA.

Google’s data supports these insights. While we found a noticeable increase in new installs growth across the board during the first months of the lockdown, the install growth rate has returned to pre-covid levels. However, time spent in games continues to be higher (+10%) than in pre-covid months, supporting the insights that players who installed games because of the changed circumstances, have continued playing.

The lockdown months saw both the number of buyers and buyers monthly spend increase in the immediate post-lockdown weeks 19% on average. ‘Quick Progression’ IAPs are becoming less popular as more meaningful investment in the game economy rises.

Most respondents said they did not intend to spend more on gaming during lockdown, however far more said they would increase than decrease. This is good news for gaming companies and is supported by our data on what revenue players have already generated during lockdown:

One very interesting revelation concerns which IAPs players are choosing to buy. IAPs that are designed to directly speed up the experience (such as repeat attempts, extra moves or account upgrades that remove ads) are becoming less popular — possibly due to users having more time on their hands and not looking for a quick session during their commute or lunch break. Instead, IAPs that represent a more purposeful investment in the ecosystem (such as rare items or hard currency) are becoming increasingly popular. This implies that players are looking for deeper and more meaningful game experiences rather than quick or convenient ones.

As mentioned above, many players have indicated an intention to maintain these new behaviors, which is a benefit all around. Studios maintain higher engagement while players maintain a new and exciting hobby that has demonstrably helped them through a stressful period.

One important question is therefore what steps a studio can take to help sustain these habits across changes caused by the ease of lockdown. To accomplish this, we look at the 4 elements of a habitual behavior (the initial desire, the effective trigger, the ease of operation and the reward) and ask ourselves how we expect them to be affected by the end of lockdown and what studios can do to ensure the habitual behavior continues. The ideas below are intended as examples to illustrate the kind of analysis that would be useful in the specific circumstances of a given studio. The critical thing is to be anticipating these problems before they arise!

As we continue through a tumultuous time it is incredibly reassuring to see the games industry remaining relatively stable. People are turning to games and the studios behind them as an antidote to the isolation and boredom of quarantine. Games have been bringing people together since the dawn of civilization, and in their response to the current crisis developers have a unique opportunity to unite people at a time when connections and community spirit are of critical importance.

Copyright © 2021 The Rabbit Hole.
A project by Killabunnies
Powered by PlayBold